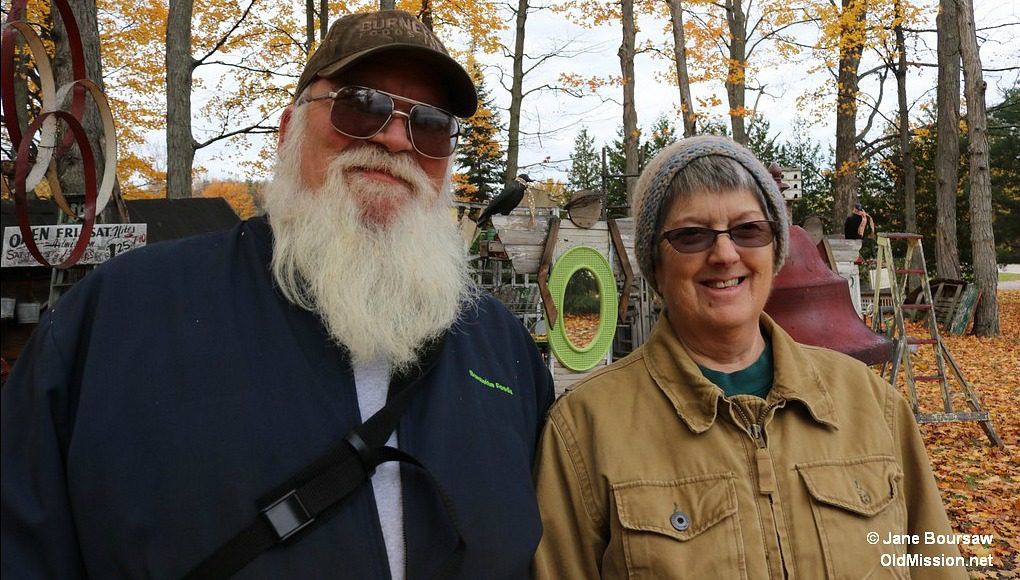 If you go by the corner of Blue Water Road and Bluff Road, you’ve probably noticed the fantastic yard there full of all sorts of amazing things. That’s Jack and Alice Lardie’s place.

My daughter and I wandered through the yard recently, took a closer look at all the fun stuff, and even signed the guest book, nestled inside a mailbox in the yard. And, of course, I snapped a few photos.

My husband Tim and I have known Jack and Alice all our lives. Jack was one of Tim’s first childhood buddies. Tim tells the story of stopping by there last year, and he and Jack got to talking. Jack said he had something to show Tim, and Jack brought out a sturdily-built, John Deere-green bobsled from one of the little outhouses in his yard. It was the bobsled that he, Tim and their fellow Boy Scout troop had made in 1963 for the Boy Scout Klondike Derby in Rapid City.

Tim recalls that there were hundreds of Boy Scouts there, and Mike Baker, Rob Weber and others were part of the troop. If you were, too, let us know in the comments below!

I don’t have a photo of the bobsled, since Tim wasn’t with us when we took the set of photos below – next time!

Jack’s dad was John Lardie, who was well known among the farmers for his ability to fix anything. I often saw him working on one thing or another in my dad’s shop and, later, my brothers’ shops. (My Dad, Walter Johnson, passed away in 2004, and my brothers, Dean and Ward Johnson, are still farming on the Old Mission Peninsula.)

Alice’s mom and dad were Ruby and Merton (“Mert”) Gilmore. Ruby was Mabel Jamieson’s sister, and Tim says their maiden name was Jerrett (not sure if I’ve got that spelled correctly), though he doesn’t believe they were part of Jeff Jerrett’s OMP clan (if you have intel, let us know in the comments below).

In the photos, you can see the sign for Mert’s mink farm; the sign used to be up on Center Road. Alice says they had thousands of mink at one time; the mink pens were located in the little woods behind Jack and Alice’s house, near where Larimer’s house is now (also where the “Blue Water Joint” used to be, but we’ll save that for another story).

Oh, and Jack is an awesome chicken-turner for the OMP United Methodist Church’s annual chicken barbecue!

Click the photos below for larger views of Jack and Alice’s yard. And leave your own thoughts and memories of the Lardie’s in the comments below!