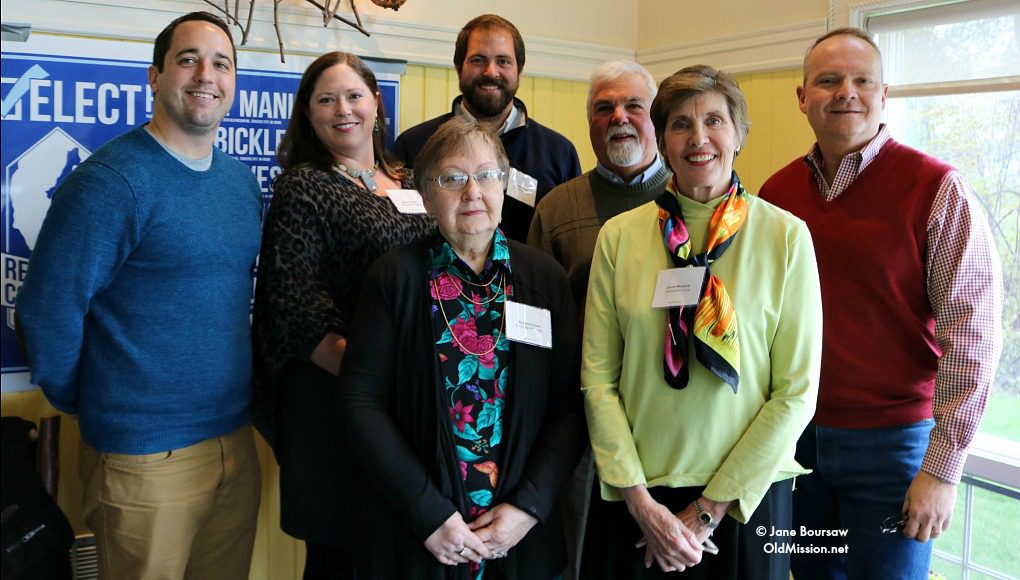 Peninsula Township residents gathered at The Boathouse Restaurant on May 14, 2016 for a “meet and greet” with seven candidates running for Township office this year (check out their bios here). The candidates at the meeting included Rob Manigold, Candidate for Supervisor; Brad Bickle, Candidate for Treasurer; Joanne Westphal, Candidate for Clerk; and Candidates for Trustee Warren Wahl, Margaret Achorn, Isaiah Wunsch and Maura Sanders.

Each candidate spoke for a few minutes, outlining their reasons for running for township office. Issues included the resignation of the fire chief and fire board, lawsuits from township residents and employees, the Master Plan losing momentum and its focus on maintaining the rural character of the Peninsula, questionable Township financial policies, little invitation by the Township for community participation, lack of communication from the Township, and issues surrounding the closing of Old Mission Peninsula School.

While the candidates are running as individuals and each financing their own campaign, they are coordinating their campaigns to show their commitment to working together as a team should they all be elected. They’re also combining their names on campaign signs, to reduce yard signage through the election process.

Fourth generation cherry farmer Rob Manigold was the Peninsula Township supervisor for 25 years, beginning in 1988. He cited his kindergartner granddaughter and six-month old grandson as part of the reason he’s running. “They will be the sixth generation on our farm, and that’s important,” said Manigold.

He also noted the possible closing of Old Mission Peninsula School as another reason. “That is so much a part of our community, and that also triggers the Peninsula Community Library. If they don’t have a building in two or three years, that’s started them thinking about moving and where they’re going to build a new library. There’s a lot of things in our community that have changed, and that’s what brought me back into the political arena.”

Brad Bickle moved to the Peninsula in 2008 from southern California, but he’s a native Michigander, having been born in Detroit. “We may have different opinions about what we believe is important to us, but one thing we all share in common is our belief and passion for Old Mission,” he said. “It’s the reason there are sixth generation farms. It’s the reason people have moved here from different locations and become part of the community. We have a lot of amazing history.”

Bickle noted that a turning point for him was when “The 81” development was approved by the Township Board last August. “What really alarmed me was how expedient a project of this magnitude was pushed through.”

Bickle’s background includes a 30-year career in the automotive corporation industry where he was a team leader and responsible for budgets, agendas, and presenting a clear message to people. “Having sat on boards, having made big decisions, there’s usually a very clear thought process and a very clear review and discovery of facts,” he said. “As we know, Judge Rogers reviewed [The 81] case and kicked it back to the township, saying ‘You missed a few steps. You ran a few stop signs.'”

He and the other candidates have been meeting weekly to discuss current and future issues on the Old Mission Peninsula. “We decided with our different strengths and experiences and knowledge, let’s get together. Because we all have the same focus, which is our Peninsula, and a reasonable balance between conservancy and controlled but logical growth.

Joanne Westphal, who taught for 28 years in the MSU Landscape Architecture Program, noted that the Peninsula residents in attendance might have various reasons for being there.

“Perhaps some of you are here because you’re curious,” she said. “Why would seven apparently mature and seemingly sane individuals wish to come together to displace a whole township board? Really now, are things that bad in the Township? The answer lies in your view of township government and the role of officials to pursue a shared vision of the future of the Peninsula with its residents.”

Westphal added that in 1988, “a group of five impassioned residents were swept into office because the then-sitting Township Board was promoting an agenda that would have made the Peninsula a playground for recreational pursuits and second home development. Residents did not share that vision. Today, history is repeating itself, and a serious disconnect exists between the Township government and the voters. They should be represented in terms of a vision for the Peninsula.”

Westphal said that others may have attended the meeting because they’re angry about the completed, in-process, or proposed developments that are out of scale for the Peninsula. “These developments are being placed in the landscape without regard to neighbors, our physical and cultural heritage, and the view sheds and agricultural land that we have worked so hard to protect and preserve from development. These types of developments have the potential to erode place identity.”

She cited rumors of poor management of the Peninsula Township Fire Department, opacity in the business affairs of the Township, nepotism, incompetence and even “chicanery on the part of certain board members.” “While only time, and perhaps FOIA requests will tell us to what extent these rumors are true, as taxpayers, we are paying for the litigation surrounding these many allegations, and that should be a legitimate concern for all of us,” said Westphal.

She encouraged the Peninsula community to become engaged in the public decision-making process that mark township deliberations. “We are all here today because this place matters to us,” said Westphal. “It is where we have built our homes. It’s where we’ve educated our children and perhaps grandchildren and great grandchildren. It’s the place where we preserve farmland and open space through millage increases and a nationally recognized program known as PDR [Purchase of Development Rights]. It is where we share the common knowledge with one another and the world that this is one of the most beautiful and unique places on earth. This place matters to us, and it is for this reason that we must once again join forces as a community to rebuild the vision that we share.”

Isaiah Wunsch, a sixth generation cherry and apple farmer, lives on one of those PDR farms, which he purchased about a year ago after moving back to the Peninsula from Lansing. “I worked for the Michigan Economic Development Corporation for a few years, and throughout the entire state, we looked at this place as a really special part of the state.”

Wunsch currently serves on the Peninsula Township Planning Commission and Zoning Board of Appeals, and noted a number of trends over the past year and a half that have caused deep concern. “I’ve seen the school issue, and our Town Board seems to be more interested in locating the Township offices to the school building than keeping the school open. That is deeply frustrating to me.”

While Wunsch isn’t opposed to development on the Peninsula, he’s seen some projects pushed through without proper vetting. “It’s unfair to community members that their voices are not being listened to by their elected officials, and frankly, it’s unfair to developers to have projects pushed through and rejected or hung up in litigation for months or years because we’re not doing our job as a board or planning commission.”

Maura Sanders said she landed in Michigan in May of 2013, from Naples, Italy, where her husband served his final tour of active duty in the United States Marines. Sanders was born in Detroit and after graduating from high school and shipping off to the Naval Academy, she said it’s always been her goal to return to Michigan. The time was right to move back to Michigan with their two daughters, 11 and 12.

“I was coming to that special place everybody’s already spoken about,” she said. “The place that on a clear day, you can see from the International Space Station. This is where i want to plant roots. This is where I want my children to call home.”

As the chair of the Peninsula Township Park Commission, Sanders noted that she hasn’t been happy with what goes on behind the scenes at the Township. “I’m not extremely pleased with the transparency issue we have, the major communication issue we have, the monetary and budgeting issues we have.”

She said she sees this first-hand on a weekly basis. “I’m in those Township offices a lot. I’m making phone calls and sending emails, and when I don’t get responses, I’m marching into the Township and looking for answers. Seventy-five percent or more of the time, I’m not getting answers. I have outstanding questions that are very important to the parks to move us forward. We’re trying to put together a 5-year, 10-year park plan, and it’s hard to do that when we don’t know what our true budget is.”

Margaret Achorn stressed that she’s a “numbers person,” having spent 35 years as a Certified Public Accountant. “I have a working knowledge of financial accounting software, and I’ve been trained on several national tax issues,” she said. “Words and details are significant to me, and I pay attention to them. That comes from the many years I’ve spent trying to decipher the IRS code.”

She noted that she’s an advocate for fiscal responsibility. “There must be transparency, especially when you’re dealing with public money. The Township Board is accountable to the taxpayers. Financial decisions cannot be made in a vacuum, especially when you’re giving yourself raises. Fiscal responsibility requires long-range planning, and during this entire budget process this year, there was no long-range planning in the public venue.”

One of Achorn’s goals is to bring back the Township newsletter, and if something unexpected comes up, send out a special edition. “Case in point … the tree clearing on Peninsula Drive,” she said. “It would have been so easy to put a notice in the December tax statement, and then follow up with a public meeting where the Road Commission could have come in and explained what they’re going to do.”

Warren Wahl said his wife grew up on the Peninsula and attended Old Mission Peninsula School. “If we have kids, we want them to attend OMPS, so we moved out here and learned that the school might be closing.”

Other issues he’s concerned with include the rewriting of the zoning ordinance, as well as the situation with the fire department. “We used to have one of the best fire ratings out here, and now it’s one of the worst.”

Wahl is looking forward to campaigning with the team in the coming months. “We’ve already shown great dedication, and we’ll continue to show great dedication if elected.”

The team is scheduling several meet-and-greets with Peninsula Township residents during the next few months, including one this weekend, two in June and one in July. They’ll also be attending community events, such as the Legion Hall dinners, as well as gatherings at residents’ homes. “We want to be open, and your opinion means a lot to us,” said Manigold.

For more information, visit the team’s Facebook page. If you’d like to attend a future meet-and-greet event, email [email protected].