The gathering on Sept. 10, 2016, featuring table decorations of flowers from Ginny Coulter’s Old Mission Flowers, was well attended by descendants of the founding families who contributed to help save the lighthouse. The festivities began at 5:30 p.m. at Old Mission Peninsula United Methodist Church and were presided over by Tim Carroll, a descendant of one of the founding families.

Following is a list of the founders, with an average donation (or subscription, as it’s called on the document) of $45.

Mission Point Lighthouse (check out the website here) was decommissioned in 1933 and the target of extensive vandalism in the following years. Due to the foresight and generosity of those 43 concerned citizens of the Old Mission Peninsula, under the leadership of George Altenburg and M.J. Pratt, $1935 was donated to secure the Lighthouse from the State of Michigan, allowing it to be protected and restored.

On Feb. 26, 1948, the Traverse City Record-Eagle ran a story which noted that the deed to the Lighthouse and surrounding property was presented to Peninsula Township. The story, titled “Peninsula Gets Old Light,” reads:

The Old Mission Lighthouse and the 5.38 acres of land on which it is located became the property of Peninsula Township Wednesday when Postmaster August Babel presented officials of the township with a deed to the property. The area and the old building will be preserved as a public park. In the top photo is shown the lighthouse as it appears today. Plans will be formulated at the spring meeting of the township board to reconstruct the light and put it in its original condition. Vandals all but wrecked it since it was decommissioned, and the desire to preserve the building resulted in a public subscription drive to raise the $1,000 dollars needed to purchase it from the government. Shown reviewing the deed to the property in the lower photo are, left to right, Township Treasurer Isma Hoffman, Justice R.F. McIntosh and Postmaster August Babel. In the grant, it is stipulated that if at any time the area ceases to be used as a public park, it will revert to the ownership of the government. In accepting the deed, representatives of the township expressed their appreciation to those persons who contributed to the fund and to those who used their influence in securing the property. 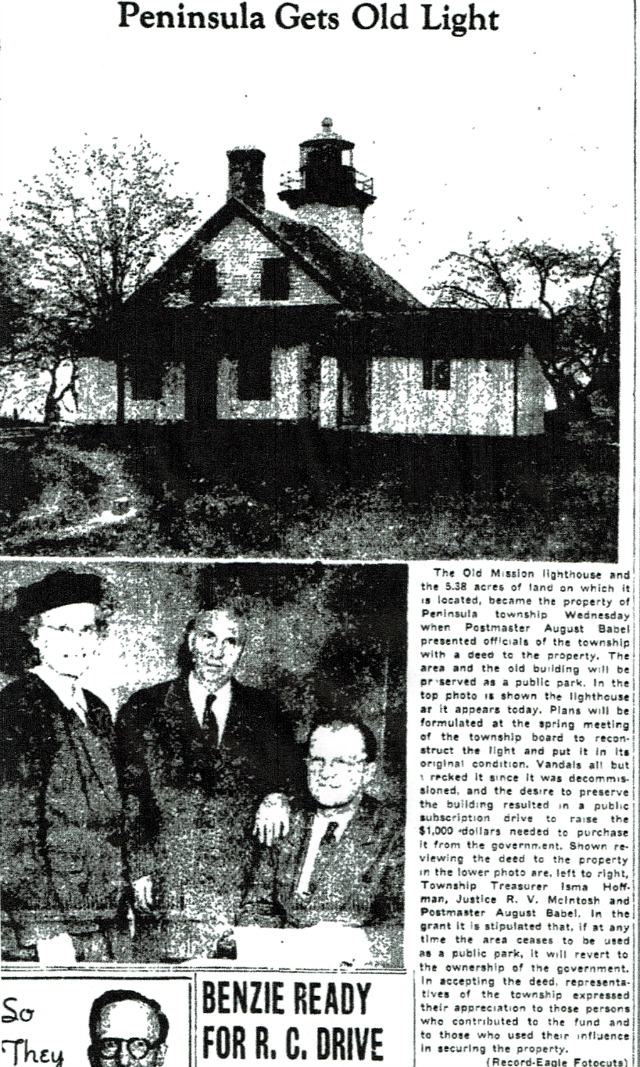 Here is a photo gallery of the event and descendants of the founding families.

(If you’re viewing this on a mobile device, click the photo below and arrow through the photos.)