I subscribe to Newspapers.com, which is a great source of history of the Old Mission Peninsula and Grand Traverse region. While browsing around looking for something interesting from Dec. 31 through the years, I stumbled across the story below in the Traverse City Record-Eagle, dated Dec. 31, 1949, which includes pretty much everyone on the Old Mission Peninsula. Well, at least in Ogdensburg.

Back in those days, the Record-Eagle had a section called “News from Rural Correspondents,” which included bits and pieces of this and that, whatever was going on with people at the time. The local correspondent for this story was Reva Gore (beloved friend, talented artist, and my oil-painting teacher when I was a kid).

It’s kind of a neat feature, but can you imagine this sort of thing happening these days? With all the privacy issues, you probably wouldn’t find a news item noting that Mr. and Mrs. Cortland Gore traveled to Drummond Island on Monday to visit her parents, Mr. and Mrs. Frank Ledy.

On second thought, I guess Facebook and social media sort of fill that void these days, right? In fact, in many ways, things are way less private than they were back in 1949.

Based on the reports below, it seems like local families had Christmas dinner with other local families more than they do now. Maybe it was more of a big deal to do that back then, or maybe they were just all related one way or another.

The print from the images below is a little hard to read, but here are a few highlights:

Mr. and Mrs. Leslie Jamieson spent the holidays at their home here. They are teaching school at Detour, Michigan.

Mr. and Mrs. William Mavety and son Frank [who later went on to own Far Out Farms] of Traverse City, Mr. and Mrs. George Cran and children, Charles and Rebecca, of Mancelona, and Mr. and Mrs. Cornelius Peet of Grand Rapids, had Christmas dinner with Mr. and Mrs. Seth Tompkins and family.

Ronald Gilmore, who is in the United States Army, spent the holidays with his parents, Mr. and Mrs. Max Gilmore.

Mr. and Mrs. Dale Christopher spent the holidays with her parents, Mr. and Mrs. Jake Methner of Coleman, Michigan.

Miss Maretta Fouch, Elmer Kitchen, and Mr. and Mrs. Jim Page, all of Traverse City were Christmas guests of Mr. and Mrs. Henry Gore and family.

Mr. and Mrs. Bax Elhart of Evanston, Illinois, spent the holidays with her parents, Mr. and Mrs. Leslie Gore.

The annual Christmas program at the Ogdensburg Methodist church was held Wednesday evening. A play was given by several of the Sunday school members under the direction of Mrs. Robert Lindsay. A few recitations were spoken and some solos were sung.

Mr. and Mrs. Ted Bagley and son of Columbus, Ohio, visited his brother-in-law and sister, Mr. and Mrs. William Marshall, during the holidays.

Garth Tompkins, who attends Michigan State College, and Bruce Tompkins, who is a student of Ferris Institute at Big Rapids, spent the holidays with their parents, Mr. and Mrs. Oliver Tompkins.

The annual Christmas party of the Cherry Center Grange was held in the Peninsula Township hall Wednesday evening. There was a program and presents were exchanged. Candy was passed to everyone and a potluck lunch was served. Former residents, Mr. and Mrs. Laurie Schavey and family of Traverse City and Mr. and Mrs. Joe Svec and family of Acme, took part in the program. 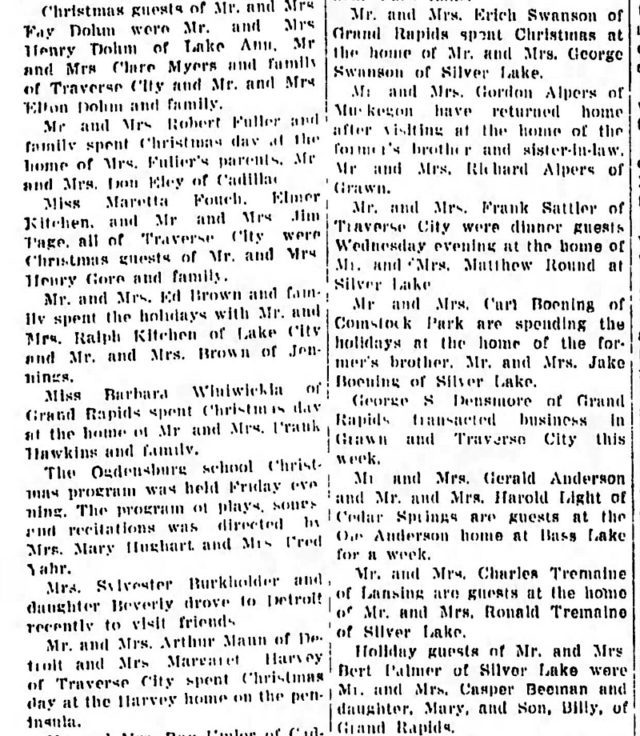