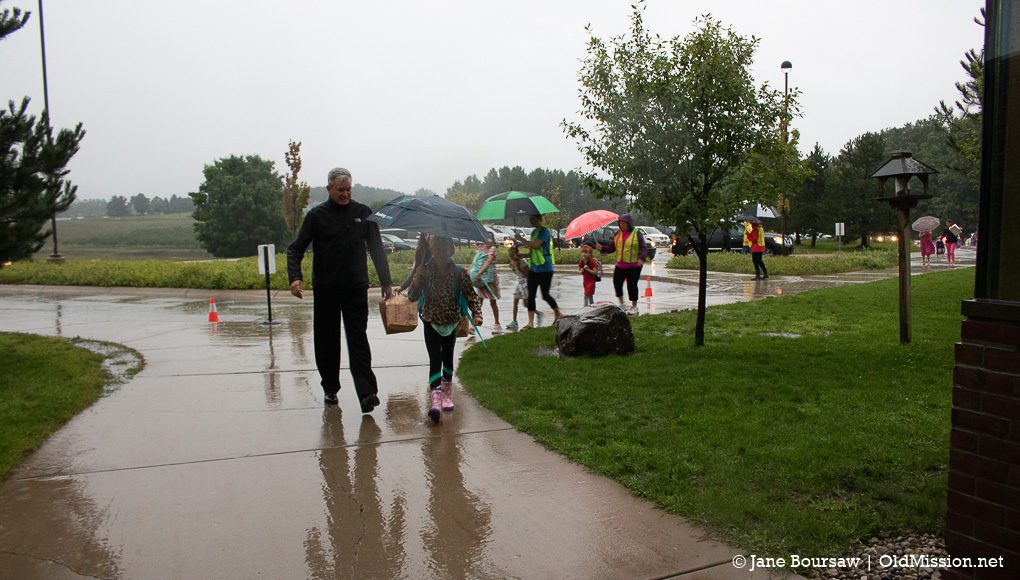 It may have been pouring down rain this morning, but that didn’t dampen spirits for the first day of school at Old Mission Peninsula School (OMPS), which opened officially as a charter school this morning.

Amidst the rain, volunteers, teachers and administrative staff cheerily welcomed students into the school, where they checked in at a desk in the lobby and lined up with their new teachers in the gym.

Today marks a new beginning for OMPS after it was marked for closure by the Traverse City Area Public Schools (TCAPS) in 2015.

An agreement was reached in January 2017 for OMPEF to purchase the school from TCAPS for $1.1 million. OMPEF secured the building, property and contents in April 2017, received charter authorization from Grand Valley State University for a new school in July 2017, and took occupancy of the school building on July 1, 2018.

Along with offering classes from Kindergarten through 6th Grade, OMPS is also collaborating with Angel Care Preschool and Child Care for infants aged 8 weeks through Pre-K.

Also, BATA began offering a brand new route, Route 16, which services not only OMPS, but also community residents of the Old Mission Peninsula.

Update on the New Pickleball Courts at Bowers Harbor Park

Update on the New Pickleball Courts at Bowers Harbor Park