The Drew Hale Band will be playing LIVE at the upcoming 2018 Boots & Bling Fundraiser for Old Mission Peninsula School (OMPS) on Nov. 10, 6 p.m., at Bewitched Farm, 12655 Center Road (just past Island View Road on the left if you’re heading north from Traverse City).

The event will also include food and drinks (cash bar – must be 21 to attend), line dancing, and a silent auction of unique local experiences and packages.

Join the fun and help the OMPS students and staff. Tickets are $30 and available at the school or by contacting Julia Phelps, julia@werthandphelps.com. Read more about The Drew Hale Band below. 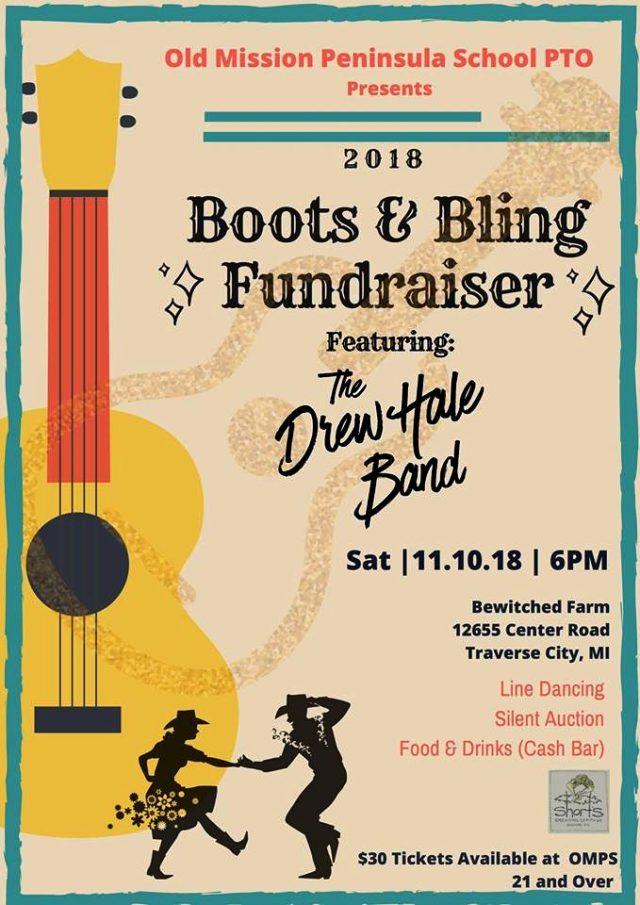 Throughout Michigan, the name Drew Hale is synonymous with powerful vocals, compelling lyrics and haunting melodies. In 2016, Drew won the national Country Showdown competition held at the Ryman Auditorium in Nashville, earning him the title Best New Act in Country Music, as well as the $100,000 cash prize. Most recently, The Drew Hale Band won the Detroit Regional round of 93.1 NashFM’s Nash Next contest.

Influenced by Texas roots and artists such as Reckless Kelly and Eric Church, the Drew Hale Band’s music pays homage to the red dirt country and southern rock scenes, as well as paints a picture of their love for the people and culture of Michigan, where the band calls home. The Drew Hale Band can be found playing throughout the Midwest, promoting their latest album, Roots and Wings (including the single, Pieces, featuring Vince Gill).

Whether on an intimate stage at one of the many wineries or breweries throughout Michigan, rocking a bar on a Saturday night, or playing festivals such as Common Ground (Lansing, MI) or Arts, Beats, & Eats (Royal Oak, MI), you can count on an eclectic show that delivers a dynamic combination of originals and covers that bridge the gap between country, roots rock, and blues.