Old Mission Gazette readers are the best, because you all send us the coolest things – photos, story ideas, editorials, etc. Feel free to send photos et al along to me at jane@oldmission.net.

Here are a few reader photos sent to us lately:

Anita Klein and Amy Lyman both sent in photos of a “fairy ring” on the Lardie property across from the Peninsula Township Hall on Center Road. Anita explained that fairy rings are mushrooms that grow in a circular pattern.

“Folklore and mythology explain fairy rings as the result of circles of dancing fairies,” she notes. “The one on the Lardie property caught my eye because it was so large.” Here is Anita’s photo. I can just picture tiny fairies dancing among these beautiful mushrooms.

Donna Tuttle sent over this photo of an albino deer running through the back of their property. Since Dave and Donna are neighbors of ours just down Bluff Road, and since we have a herd of deer at our apple tree nearly every day, I’ve been waiting impatiently to see this unique deer over here. No such luck so far. Come on, Casper. Show yourself.

Of the other turtle, Katy notes that it had all kinds of algae and moss that looked like it was growing on his shell. “I think he looked like a soft shell, but his shell was so green that it was hard to i.d.,” she says. “He had a long neck, pointy head and powerful front legs. His nails were like talons.” She adds that she did not try and pick him up. Good decision, Katy.

Likewise, I don’t recall seeing turtles when I was growing up in Old Mission either, although I know people used to spot them down at Prescott Lake off Swaney Road (we always called it Swaney Lake).

It must be a good year for turtles, because we’ve had our own neanderthal turtle here on Bluff Road. Here’s a picture that our neighbor Pat Sharpnack texted to me just as the turtle was heading for our ditch at the bottom of the driveway.

Like the Kern turtle, our turtle is so old he even has moss and what looks to be a sapling growing on his back. (But ok, it probably just landed there as he crawled through the terrain … or not…)

Nancy Davy always has the most interesting visitors at her house over on West Bay. Remember that photo she sent me of a tree toad on her window last year? Here’s a walking stick on her window. This guy deserves his own cartoon show.

It seems like I used to see walking sticks all the time as a kid growing up in Old Mission, but it’s been years since I’ve seen any like this handsome fellow.

And we always love rainbows here at Old Mission Gazette. David Kern sent this photo along, noting that it was a welcome sight in the neighborhood after a 9 1/2 hour drive. We’ve had a few stunning rainbows this summer – here’s one I posted to our Instagram account that I shot over in Greilickville a week or two before David’s photo. As we stopped to take a few photos, all the diners at Harrington’s by the Bay spilled out into the yard to take pictures of it. 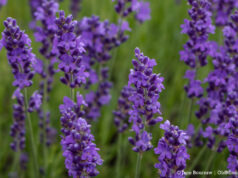 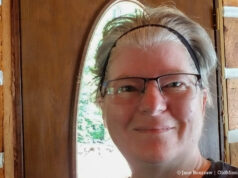