And that’s true for a lot of old family names on the Old Mission Peninsula. Those of us who grew up with them know how the family pronounces their name, even though it might be different than how it looks on paper (or screen, in this case).

But for names that might be challenging, here is your official guide to pronouncing old family names on the Old Mission Peninsula. I’m sure I’ll miss some, so feel free to add yours (and how to pronounce it) in the comments section below the story. You don’t even have to live here for 150 years. All names are welcome!

Also, let me know if I’ve been pronouncing your name wrong for the past 59 years. I’ll start with mine and then go alphabetical from there…

BOURSAW. This is pronounced “Ber-saw,” NOT “Bore-saw” like you might think. This name has gone through a lot of changes over the generations, including Bourassa, Bourasaw, Bourisau, and even Bourraseaux, as hand-written in a book at Fort Mackinac on Mackinac Island. I haven’t been able to convince the family to change it back to that fancy French version, but I’ll keep working on them.

ANDRUS. Pronounced “An-drus,” with a short “a” and a short “u.” When I say it, it comes out “An-dris” with a short “i.” The family can jump in and let me know if that’s acceptable.

AYERS. While I don’t believe there are any Ayers left on the OMP, you’ll often see me mention “Ted Ayers’ Barn” on the corner of Center Road and Swaney Road. That name is pronounced simply “Airs.”

BUCHAN. Pronounced “Bu-can,” with a short “u” and a short “a.” As the Buchans like to put on their ice cream labels, “It’s Buchan good.”

DANA. Pronounced “Day-na” with the second syllable sounding like “uh.”

DeVOL. Pronounced “Dee-vawl,” with the emphasis on the second syllable.

EDMONDSON. Pronounced “Ed-mund-sun.” However, when I saw it, I don’t really pronounced the “d.” It’s more like “Ed-mun-sun.”

EIMEN. I’m not sure there are any Eimens left on the Peninsula, but here’s how you pronounce Eimen Road: “I-men,” with a long “i.”

EMORY. I’ve always heard this pronounced “A-mory,” with a long “a” at the beginning, but could be wrong on that. If any Emorys read this, let us know.

FEIGER. Pronounced “Fee-ger,” with a long “g.” Rhymes with “eager.”

GILES. Pronounced “Jiles,” with a long “i.” Rhymes with “miles.”

HASEROT. While I don’t believe there are any Haserots left on the Old Mission Peninsula (are there? let us know if that’s your name and you live here), but here’s how to pronounce Haserot Beach: “Has-e-rot,” with the emphasis on the first syllable.

HOFFMAN. I’ve always pronounced it “Hawf-mun,” with a short “u,” but have heard others say “Huff-mun.” Hoffman Family, jump in and let us know how you pronounce it in the comments below.

HOLMAN. Pronounced “Hole-mun,” with a short “u.” Read some Holman Farm history here.

JARRETT. Probably self-explanatory, but I’ll throw it in here: “Jare-et” with a short “a” and a short “e.” Rhymes with “carrot.”

KROUPA. Based on how Fouch is pronounced, you’d think Kroupa might follow suit. However, the Kroupa family pronounces it “Crow-pa.” Most definitely not Krupa, as in the legendary big band drummer Gene Krupa. Here is one of the Kroupa homes of yore.

LEIGHTON. Pronounced “La-ten,” with a long “a.” Rhymes with Dayton, as in Dayton, Ohio.

MANIGOLD. Probably self-explanatory, but in case anyone doesn’t know, it’s pronounced “Man-i-gold,” with a short “i” in the middle.

MLUJEAK. Pronounced “Muh-lu-jek,” with a long “u.” Read about Lawrence Mlujeak’s Garage that recently came down.

MONTAGUE. Pronounced “Mon-ta-gew,” with a short “o,” the “a” sounding like “uh,” and the third syllable rhyming with “few.”

PELIZZARI. Pronounced like it looks: “Pel-i-zar-ee,” with a short “i” and the third syllable rhyming with “are.” Read about the Pelizzari family here.

REAY. Pronounced  with two syllables: “Ree-ah” (Reay Family, jump in if you pronounce it differently). Check out Tim’s interview with Marty Reay here, where he talks about his dad Chum’s ice business in Old Mission.

SCHAVEY. Pronounced “Sha-vee,” with a long “a.” Rhymes with “navy.”

SOLOMONSON. Pronounced “Sawl-mun-sun,” but shortened to “Sawl” in many cases, i.e. Jack “Sawl” (who once owned the Peninsula Telephone Company with his wife Vi – check out Tim’s interview with Vi here.)

SWANEY. Pronounced like you might think: “Swa-nee,” with a long “a.” There’s another old family name, “Sweeney,” which is also pronounced like you might think: “Swee-nee.” The lake on Swaney Road, now known as Prescott Lake on Google Maps, was once known by old-timers as Sweeney Lake. George Boursaw mentions it in his story about ice-skating on the Old Mission Peninsula in the 1940s and 50s.

WOLLAM. Pronounced “Wall-um,” with a short “u.”

WUNSCH. Pronounced like you probably think: “Wunch,” with a short “u.” Rhymes with “bunch” and “munch.”

Check out historical photos of the Old Mission Peninsula at OldMissionPhotos.com. 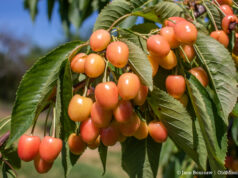 When Will Cherries Be Ripe and How is the Crop Looking? – 2020 Edition 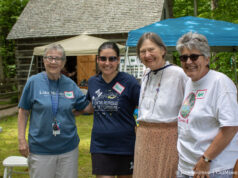 When Will Cherries Be Ripe and How is the Crop Looking?...