There’s a lot going on with the Peninsula Fire Department (PFD) these days. Let’s take a look at some recent news.

NEW FIRE ENGINE ARRIVES. There’s a new engine at Fire Station 1 in Mapleton. I talked with Chief Fred Gilstorff, who said that upon its arrival on the Old Mission Peninsula, the PFD crew gathered to symbolically push the truck into the station after a prayer and blessing was said. They also drove the new Engine 1 in the Old Mission Parade last week.

Gilstorff said the new truck – a 2019 Spartan S180 – replaces the old engine (1994), and comes equipped to fight residential and commercial fires. It also features a shorter wheelbase to help with sharper turns, and carries a battery-operated Jaws of Life, a large 5″ supply line for longer driveways, and basic emergency medical equipment to assist with medical needs before the ambulance arrives.

Here’s a short video of the blessing ceremony.

FIRE STATION 3 MOVES FORWARD. In March, we reported that the PFD was seeking a location for a fire station on the north end of the Peninsula. This station would not only provide faster fire and emergency care to residents in that area, but it would also help to improve the fire department’s ISO (Insurance Service Office) rating, which would result in better insurance premiums for homeowners in the area.

While they initially looked at using Lawrence Mlujeak’s garage near Haserot Beach for this station, it was determined that the required restoration would be too extensive to bring it up to code for a fire station, and the building was subsequently demolished.

Chief Gilstorff and the Township Board began a search for land on which to build a new station. It was ultimately decided to build it on a Center Road parcel between Swaney and Tompkins Roads, currently owned by Don and Barb Switzer, who run Switz-R-Land Christmas Tree Farm there.

At tonight’s Township Board meeting, the board unanimously agreed to authorize Township Supervisor Rob Manigold to purchase 2.35 acres from the Switzers for $18,000 per acre, bringing the total cost to $42,300.

The Board previously thought the acquisition would be for two acres, however, Peninsula Township’s land division requirements necessitated the extra .35 acres. This also allows for more frontage on Center Road, as well as a larger area on which to design the building.

The project now moves to the Planning Commission for the special use permit process.

“With any luck, we’ll have the building up before snow flies,” said Manigold.

Here’s a short video of the location for the new Fire Station 3. 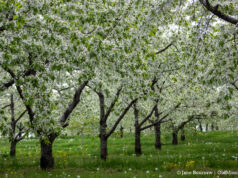