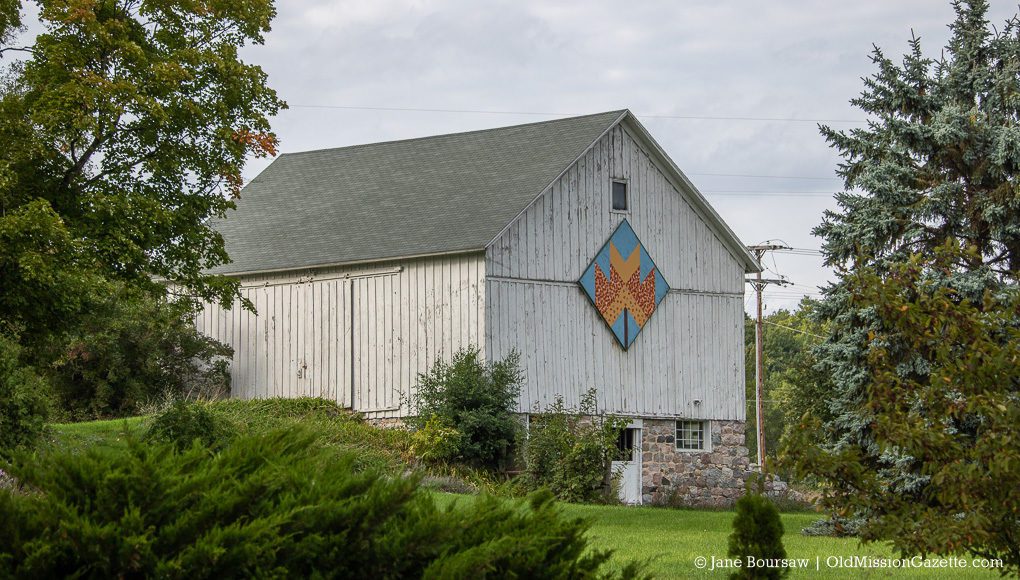 It’s a beautiful old barn on Center Road that most of us drive past every day, located just far enough off the road that you might miss it if you didn’t glance over there.

But this particular barn, at the intersection of Center Road and Montague Road, has a long and storied history on the Old Mission Peninsula, along with a deep connection to one of Old Mission Gazette’s long-running advertising partners.

I’ve taken many pictures of this stately barn over the years, but it took on special meaning when Don Nowka, owner of Bay View Insurance (our aforementioned advertiser on the Gazette), sent me a note last year that his wife Liz’s grandma, Joan Zupin, had passed away at the age of 99.

Joan was born on May 15, 1919, to Deronda “Chum” and Eva (McManus) Crandall, and was raised at the family lumber mill in Grawn before moving to Traverse City. She graduated with the high school class of 1936, then attended Davenport School of Business before marrying Ralph Bert Zupin at St. Francis Catholic Church on Jan. 3, 1942.

Stick with me here, because this family’s roots run deep in the Traverse City area. In her earlier years, Joan helped her brother, Curly Crandall, by doing bookkeeping at his gas station on Eighth Street (which is still there on the corner of Eighth and Union). Later, Joan worked for the State of Michigan for 20 years, retiring in 1983.

Meanwhile, the intersection south of Traverse City known as Chum’s Corners was named in honor of Joan’s dad. And Joan’s brother, Max Crandall, started Max’s Service, a still-thriving appliance business in Traverse City and owned by the same family.

Here’s the Old Mission Peninsula connection: Joan’s mother (and Liz Nowka’s great-grandmother), was, as mentioned, Eva Marie Crandall. Eva’s parents were Art and Letitia (Clune) McManus, who owned the farm where this iconic barn is located. Eva was born in the farmhouse there and taught at Stoney Beach School right next to the farm.

In Evelyn Johnson’s lovely book “Barns of Old Mission Peninsula and Their Stories,” she notes that the farmhouse was built in 1892, and while the specific build-date of the barn is unknown, it was likely built either around the turn of the century or prior to 1900.

Evelyn also notes that Joan remembered picking cherries on her grandparents’ farm, known as “Orchard Acres,” and that Joan brought her mom, Eva, back to see the farm when she was in her 90s. Eva was delighted to see that the barn and home were so well-cared-for over the years.

The 40 acres of this farm was purchased by Art McManus (Eva’s dad) when he moved to the Old Mission Peninsula from Canada. His name is on the 1895 plat map and was still on the plat map in the 1930s. I believe he was known as “Big Art,” because there was another Art McManus on the Peninsula, known as “Little Art.”

“Big Art” was a first cousin (I believe) to “Little Art,” who was Senator George McManus, Jr.’s grandfather. According to George, “Little Art” was a colorful character who liked to fight and was known in the lumber camps of northern Michigan and the Upper Peninsula as the champion fighter of all the lumber jacks.

“Big Art” and Letitia McManus owned Orchard Acres until the 1930s, when the farm was sold to Wallace Van Cleve, Sr. The Van Cleve family hailed from Thompsonville, where they had other orchards. When Wallace, Sr. passed away around 1945-1946, Frank Youker managed the farm for Mrs. Van Cleve from 1949 to 1955.

Frank Youker was Mildred “Millie” Shea’s father, and growing up, she remembers being friends with the Van Cleve children on the farm. In 1955, all but ten acres were sold to the Grishaw family, whose property adjoined the Van Cleves. (Millie Shea is Don Shea’s wife; their farm is just down the road from Orchard Acres.)

Wallace Van Cleve, Jr. was the next owner of the farmhouse and barn. According to Evelyn’s book, his business was the R.C. Warren Cherry Processing Plant, which I believe was the brine operation part of Peninsula Fruit Exchange (PFE), on the corner of Peninsula Drive and Kroupa Road. PFE was purchased by Seneca Foods in recent years.

Orchard Acres’ farmhouse and barn have been through several owners over the years, but in Evelyn’s book, it’s known as the “Florence Barn,” because Ben and Janet Florence were the owners at the time the book was published.

When Tim and I stopped by there recently, the current owner, Mike Carey, was kind enough to show us around the barn, which is still in amazingly great shape. Mike is a former United States Air Force Major General who co-founded Atlas Space Operations.

Many thanks to Mike for taking time to show us around this magnificent OMP barn, which is 38′ x 40′ with a gable roof and a mortar foundation made of beach sand and rocks. The interior is very similar to my family’s barn (Johnson Farms), which was built around the same time, just north of Mapleton.

And thanks to Don Nowka of Bay View Insurance for alerting me to this awesome piece of OMP history. Don and Liz are also connected to me through my family’s farm, Johnson Farms, who haul cherries to Peterson Farms in Shelby, Michigan, where the Nowkas have family.

Peterson Farms produce a lot of fruit products, including for food service, brewery/cidery, and fresh-cut apple slices and apple sauce products to schools all across the United States. A great home for OMP fruit via Johnson Farms. It really is a small world when you get right down to it.

And be sure and check out Bay View Insurance for all your insurance needs. I am very picky about who gets to advertise in Old Mission Gazette, and Don and Liz Nowka are great people.

And they’re also the humans for these adorable dogs, Forrest and Finn. Here’s a pic I took of them at last year’s Alzheimer’s Walk in Traverse City.

Folks in the know, let me know if I’ve got all the facts and family connections straight in this story! Feel free to leave comments below or email me at [email protected].