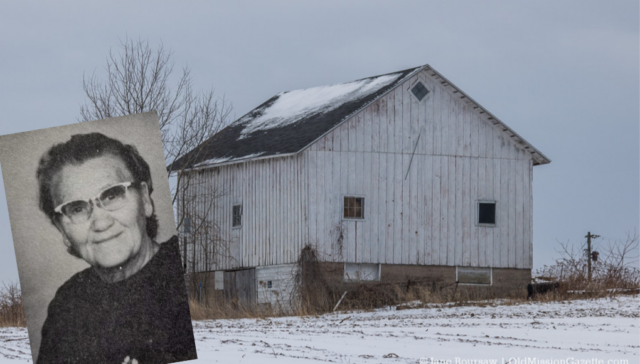 Her name was Emily Bartko, but she was known among the OMP community as “Grandma Bartko.” When I was a youngster, she lived with her son, Joe Bartko, and his family on Old Mission Road, just down the road from where I grew up.

The Bartko kids were Greg, Gloria and Gary (and Betsy, who must have been younger because I don’t remember her). They lived on Old Mission Road, in the first farmhouse on the right when you turn off of Center Road and head east on Old Mission Road. According to Ancestry.com, Joe passed away in 2017 in Kingsley.

Here’s a present-day photo (well, last winter) of the barn near the house where they lived on Old Mission Road.

Sometimes I would get off the bus at Grandma Bartko’s and she would look after me until Mom came to fetch me. She was a woman of many talents – quite skilled in the kitchen and well known for her beautifully decorated Russian Easter eggs.

She taught me and other folks in the OMP community how to decorate those eggs – a process which involved melting crayons on the stove (seems to me we used muffin tins with a different color in each space), then gently applying the colored wax onto the eggs using a pin with a little head on it, like you’d use for sewing. You pricked holes in each end of the egg and carefully blew out the yolk, leaving a hollow egg ready for decorating.

I still have one of those eggs, carefully preserved through the years, and found when I cleaned my parents’ house out a few years ago. Here’s a Record-Eagle story dated April 11, 1966, about an Old Mission Women’s Club meeting where Grandma Bartko displayed some of those eggs and talked about her Russian heritage.

As mentioned in the story, Grandma Bartko also played the guitar and sang. I especially loved it when she sang songs in Russian – so exotic for a kid growing up on a cherry farm in Old Mission.

Here’s another story dated Jan. 21, 1976, which notes that she played her guitar for the Old Mission Women’s Club (along with others, including my mom, Mary Johnson, who played a piano solo).

Grandma Bartko was great with kids, and in many ways, seemed like a big kid herself, always smiling and ready to give and get hugs. She went to our church – Odgensburg United Methodist Church – and she always had fun little tricks to keep the kids entertained. I remember one where she fashioned a handkerchief into a mouse and somehow made the mouse jump out of her hand. So mysterious!

In later years, she took care of Mrs. Murry (Lou) Tompkins in the farmhouse on Old Mission Road where Lenny Ligon lives now.

I wish I knew more about Grandma Bartko’s life before she arrived on the Old Mission Peninsula. According to Ancestry.com, her maiden name was Emily Stavisky, and she was born in Pennsylvania on Jan. 12, 1900 to parents Joseph and Anna Stavisky, both born in Austria.

She married John Bartko in 1919 in Connecticut. According to Ancestry.com, he was born in Austria, served in WWI, retired as a machinist from Transamerica DeLaval, and died in New Jersey in 1985. They had six children: George, Irene, Pauline, Daniel, Joseph and Harold.

Grandma Bartko died on Jan. 7, 1983, and is buried in Ogdensburg Cemetery. If anyone has more info about her life before she arrived on the OMP, feel free to tell us in the comments section below.

Prepare one favored recipe pie crust. Roll out on board into 24″ x 8″ rectangle. Cut into one-inch strips and bake all but enough to cover top.

Cook enough apples to fill baking dish for 10 minutes. Put a layer of baked strips in bottom of dish. Add a layer of apples. Sprinkle with 2 Tbsp. sugar and a little cinnamon.

Lay another layer of strips the opposite way. Add more apples; and so on. When dish is full, put unbaked strips on top to form a lattice crust. (Or, instead of the strips for the top layer, use uneven cut pieces chopped with 1/2 cup sugar). Sprinkle with more sugar and cinnamon.

Is good in lunch boxes.