After seeing a couple posts on Facebook today about the stunning view from Center Road near Chateau Grand Traverse, I thought it would be a good time for a story about the Friedrich Tower.

Somewhere along the way, after Chateau Grand Traverse was built, this iconic spot where everyone pulls over to take pictures of the sunset came to be known as “Winery Hill.”

As with all history stories published here on Old Mission Gazette, details can get skewed with each passing generation. So if you have better or more accurate info than what’s posted here, feel free to leave a comment in the comments section below or email me at jane@oldmission.net.

There were two towers on the Old Mission Peninsula. One was the Golden Tower, located on Eiman Road at the top of the hill, on the John and Pat Marshall farm. This tower, constructed around a poplar tree, was built by the children of Windsor Golden, early settlers of the OMP. I found a note in my sister Carolyn Lewis’ archives that Windsor Golden’s daughter, Ida, had the tower built in honor of him.

May Mills, who lived on Smokey Hollow Road when I was a kid, was a Golden, and I wrote a little about her history here.

The other tower was the Friedrich Tower, built in 1920 by A.V. Friedrich. (The Golden Tower was also built around the same time, I believe; Carol’s notes indicate that it was built in 1924.)

The Friedrich Tower was located on Center Road at “Winery Hill” (Chateau Grand Traverse), on the west side of the road in the scenic overlook where everyone pulls over to take pictures of the sunset. Here’s that view today.

The Friedrich Tower was the site of the first official Blessing of the Blossoms on Sunday, May 24, 1925. According to a Traverse City Record-Eagle report (see Peg Siciliano’s excellent story here), more than 1000 people gathered at the tower for the event. The tower was decorated with bunting, blossoms and evergreens, with the American flag at the top.

The postcard image doesn’t “look” like it’s on Winery Hill, but it’s hard to say. I also know that Orson Peck was known to enhance images, like he did with one postcard showing a “street car” on Front Street in Traverse City.

At the 1925 Blessing of the Blossoms, a blessing was given by the Rev. Floyd Blewfield, District Superintendent of the Methodist Church, and music was provided by a male quartet. The Record-Eagle described it as “the most impressive religious ceremony ever held in the Grand Traverse Region.”

However, the weather was not particularly cooperative. The next day, the Record-Eagle published this report:

“A chill wind whistled across the hill top and it … was found better to hold the ceremonies in a deep valley southwest of the tower, which offered shelter from the northwest winds. It was in this setting that the religious ceremonies were held. The crowd was banked against the north side of the valley while the ministers of the city stood at the foot of the slope and preached up to the multitude…

Half the crowd which attended the ceremonies remained in their automobiles because of the cold winds, thus reducing by half the congregation which assembled on the hillside. Unfortunately, those in the cars were unable to hear Rev. Blewfield’s excellent address and the music by the quartet, because of the high wind hustling over the hills.”

I believe this is the photo from that particular Blessing of the Blossoms on May 24, 1925.

My husband Tim notes that the two towers – the Golden Tower and the Friedrich Tower – were originally built for tourists, and the Golden Tower charged admission to go up and look at the view.

The towers were also used as “observation towers” at the end of WWII. I know this because my mom, Mary Johnson, took shifts at the Friedrich Tower in the late 1940s to watch for planes.

In my sister’s papers, I found this note from an interview she did with mom about watching for planes at the Friedrich Tower:

“A little room at the top of the tower had a telephone in it, and watchers reported every time any plane flew over. There were at least two people observing at any one time. They had to call – perhaps the airport or Grand Rapids – and report in. This was being done all over the country, and particularly here, because planes could easily fly in from Canada through northern Michigan.”

Leave thoughts or additional/corrected info in the comments section below. 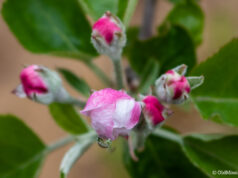