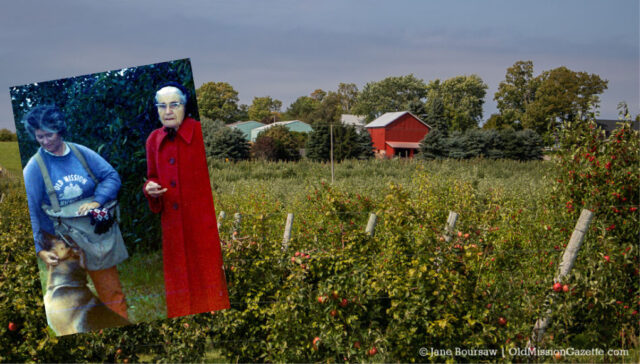 I honestly don’t remember my mom making this recipe when we were kids, but then again, she didn’t have a lot of extra time to spare. She worked the night shift as a registered nurse at Munson Medical Center, getting home just in time to see me and my three older siblings – Dean, Carol and Ward – off to school in the morning. I don’t remember when she slept, because she always seemed to be doing things during the day – working on the farm, in the garden, in the kitchen, etc.

She grew up in the south, met my dad, Walter Johnson, at Northwestern University in Evanston, Illinois (she worked the night switchboard, he was the night watchman, one thing led to another), then got her nursing degree at Medical College of Virginia (MCV) during WWII while Dad was shuttling prisoners of war across the country by train.

He proposed to her while he was in officer’s training at Annapolis, and they were married in 1946 at Clarendon United Methodist Church in Arlington, where her family lived. She had one more year at MCV, and then came north to be a farm wife in 1947. I’m sure it was a culture shock for that city girl, but she seemed to take things in stride and bloom wherever she was planted.

Here’s a picture of Mom in the apple orchard on what we call “The 40” (corner of Peninsula Drive and Kroupa Road – still in the family) with my Grandma Stella Johnson (dad’s mom) and my brother Dean’s German Shepherd, Duke.

Below is that same apple orchard on The 40 today. The massive old apple trees behind Mom and Grandma have been replaced with more modern close-planted trees that are (way) easier to pick.

Let me know if you try this recipe and how it turns out. Also, a lot of these vintage recipes are heavy on the sugar and fat. If you modify it with healthier/less of those, let me know that, too!

Add dry ingredients to egg-milk mixture all at once; mix til smooth. Pour over apples. Sprinkle wtih 1/4 c. walnuts.

UPDATE: On the Gazette’s Facebook page (go like it here), Denise Cooley notes that she made it with a few substitutions: “I used gluten free one-to-one flour and maple sugar in place of the regular flour and sugar,” she says, noting that she had to use a larger 9 1/2″ pan, and it turned out “delicious.”

Also, OMP resident John Bercini emailed to say that he and his wife Rebecca baked this recipe. “It’s more like a cake than a cobbler,” says John. “We used an 8″ x 4″ deep round CorningWare dish because a pie pan would not hold all the ingredients. It rises!”

He adds, “It tastes great. Like a cake on top of apples.” Here’s John and Rebecca’s photo of the finished recipe:

Milkweed Around the OMP – Doing Our Part for the Monarch Butterflies

We Are Farmers: Chateau Chantal

Milkweed Around the OMP – Doing Our Part for the Monarch...

We Are Farmers: Chateau Chantal