Twenty-nine veterans were escorted into the school gym by their kids, grandkids and friends, as their military background was read by organizer Debra Hartley.

OMPS Students sang songs, read poems, and asked questions of the veterans during a Q&A time at the end of the ceremony – everything from what kind of food they ate during their service to the best thing about serving in the military (making lifelong friends was at the top of the list).

Here’s a photo gallery of the memorable event. 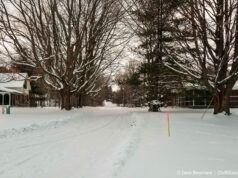