Longtime Old Mission Peninsula resident Jim Hilt passed away on May 20, 2020, and a celebration of life is planned. The service will be held on Saturday, August 15, 11 a.m., at First Congregational Church at the southern end of the Peninsula, 6105 Center Road. The service will be outside, and those attending are asked to wear masks. Pastor Chad Oyer will be the lead speaker.

As with so many Old Mission Peninsula residents that have been part of my life, Jim was a kind and caring man who always lent a hand where needed. His mom, Marian, was a beloved teacher at Old Mission Peninsula School in the 1960s and 1970s. She was my sixth grade teacher for the school year of 1971-1972.

Her husband George (Jim’s dad) had passed away by then and she’d re-married Albert Happel. So she was Mrs. Happel when I had her for sixth grade, but even now I often refer to her as Mrs. Hilt, because that’s who she was when my siblings had her at Old Mission Peninsula School.

Here’s my class photo from that year (that’s me on the bottom row, third from the right). I was never great at math, so Mrs. Happel would invite me to her house after school so she could tutor me in math – which she did oh so patiently. I rode my bike up there after school on many a day. Any math I’ve retained over the years, I owe to her.

Marian was a Leighton, and Tim and I lived for a time in their family homestead on Smokey Hollow Road, near Ladd Road. I’m not sure who is pictured in the photo below, but I’m guessing they’re Leightons, as the photo is near their driveway, as noted on the photo.

One of the girls may, in fact, be Marian. If you know, tell us in the comments below, or email me, [email protected], and I’ll add it here.

Also, if you’re familiar with the War Memorial located at the end of Center Road near Mission Point Lighthouse, you can thank Jim for that. Built by the Cherry Center Grange No. 1850, Jim was responsible for restoring the memorial some years ago. Read more about it here.

Tim and I will so miss seeing Jim around the neighborhood and at the summer barbecues held at the Old Mission Congregational Church. And I’ll miss seeing his lovely comments on my Old Mission Peninsula photos and stories on the Gazette and social media. Rest in peace, dear friend.

From Jim’s obituary in the Traverse City Record-Eagle:

Jim attended school in Lake Worth, Florida, where he was a member of the marching band and swim team. After graduating from high school, he attended Auburn University, studying electrical engineering.

In 1959 Jim met the love of his life, Carlene (Piatt, Maxwell) and on Jan. 22, 1961 they married in Bluefield, Virginia. Together they built a life of love and marriage that spanned 60 years, five children, several moves and countless close friends.

Retiring in 1996 after a career with Kmart Corp. that included eight years posted to the international headquarters, Jim returned to his roots, settling in the family home on Old Mission Peninsula where he enjoyed his bliss that was his wife, family, friends and community. Jim and Carlene are members of the First Congregational Church.

Jim was born with a genuine love for life that he never lost. He loved the sound of his mother’s laughter and playing games with his brothers. He enjoyed his summers growing up working his grandfather’s farm and cherished those memories with his cousins.

His life and marriage were built on a foundation of strong faith in Jesus Christ, serving the Lord leading worship services as Sunday school teacher, Deacon and with the Gideons. He invested his love and joy into his own family where he is remembered as the husband, father, grandfather and great grandfather full of laughter, supreme dad jokes and masterful pranks.

He was never far from Carlene’s side; his main source of enjoyment was doting on her and seeing to her needs. Their life together was among the many inspirations they provided to their kids, grandkids, great-grandkids and friends.

From his roots and into his community Jim never knew a stranger, quick with a smile and a handshake he was a friend to everyone he met, offering help in any way. He never left a friend in need and everyone he met left his presence a little lighter for it.

Jim was a true patriarch to his family, who loved to reminisce a man with a true moral compass tempered by compassion, full of wisdom and bound by love for family, friends and neighbors. He will rest eternally in the Ogdensburg Cemetery to the ground that he loved so dearly. We are eternally grateful for his presence in our lives, and he will be greatly missed. 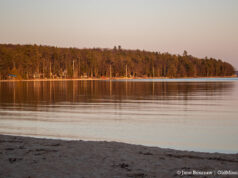 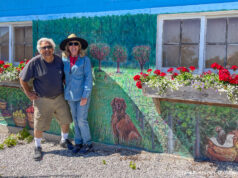 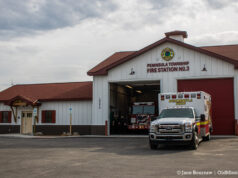 Walking Around Old Mission Point from New York – Essay by...