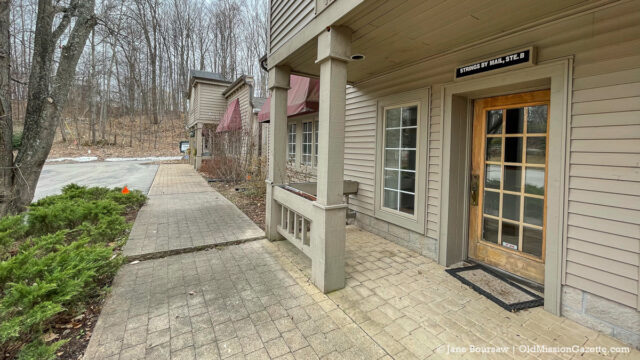 At this week’s meeting of the Peninsula Township Board, the board denied Special Use Permit No. 139 for the Seven Hills Road redevelopment project and sent it back to the Planning Commission for further work. A public hearing was also held during the meeting.

The current application does not include a two-story, 10-unit motel, which was in the original plan presented to the Planning Commission in December, as the developers do not have the required five acres necessary to move forward with the motel.

In addition to the new uses, they will also be utilizing the existing uses approved under the original Special Use Permit No. 35. At one time, the property was owned by Arnold White and used as an engineering and manufacturing facility, specializing in cherry sprayers and cherry shakers.

For many years, it’s housed a handful of occupants, including Tinker Studio, Old Mission Massage Therapy, John Wunsch’s Strings by Mail and others. Rick Burbee, who owns Tinker Studio with his wife Mary Kay, was at the meeting and spoke during the public comment time. He said they are in favor of the project.

Township attorney Greg Miehn said there are several issues that need to be resolved at the Planning Commission level before it can come back to the Township Board for review again.

Miehn also mentioned the possibility of going into closed session at a future meeting to address legal issues regarding how the previous special use permit is being asked to be modified, although he did not go into detail on that matter.

“With a little bit of work and polish, we can bring it back to the board and be in a position to approve it,” said Miehn.

He added that because of ongoing Covid-19 restrictions and the possibility of having to cancel Township Board meetings in the near future due to rising cases, any fees for the application from this point forward should be waived. This was approved by the Board.

The Board also voted unanimously to deny the special use permit and send it back to the Planning Commission for further work.

Developers Brian Peace and Troy Daily were at the meeting to answer any questions, and both noted that they’ve submitted everything that’s been requested so far.

“We’ve been informed that everything looks good to this point and there shouldn’t be anything more we need to submit,” said Peace. “So it’s a little frustrating hearing this now. It’s challenging, I understand that, but also frustrating.”

Daily agreed, noting that all the issues mentioned could have been addressed prior to the meeting. “What we’re trying to do is use by right,” he said. “We’re really just trying to update the property to something everyone can enjoy.”

OMP resident Nancy Heller spoke during the comment time of the public hearing, noting that the new special use permit should have been brought to the Township Board as an amendment to the original special use permit. She also expressed concern about the possibility of overflow parking and noted that some of the new uses could encourage trespassing on adjacent properties.

Township Clerk Becky Chown read several notes from OMP residents into the record, including one from Al and Susan Cogswell, who said they are in support of the project. “We personally know Jordan Valdmanis and Jay Milliken and have full confidence in their ability to create a quality product,” they wrote.

Kathy Doelker said that while the proper steps are being followed, she has some concerns about the types of businesses that would be allowed and is not in favor of another tasting room and wine/beer bus tours. “Where can the locals go to schedule a massage or take an art class and have it be peaceful?” she wrote.

She also expressed concern about traffic. “Seven Hills Road is busy,” wrote Doelker. “People drive fast, and traffic will not necessarily be looking for pedestrians.”

Helen Mumford, who lives south of the project, is concerned about the possibility of a motel being built in the future.

“If one is allowed, more will come,” she wrote. “Before you know it, we’ll have an endless line of property owners asking for special use permits.”

If you have thoughts about the Seven Hills project, feel free to leave a comment below or send a note to Peninsula Township Planner Randy Mielnik, [email protected].